The idea of the EMBRACIN project derives from the significant experience of Prof. Calò and his family. Based on their personal practice, as hosts of migrants, they developed a scheme called “6+6×6” which in 2018 was awarded by the Italian President of the Republic and by the European Parliament.

When – in the afternoon of April 19, 2015 – Antonio Silvio Calò heard about the latest migration tragedy in the Mediterranean, he decided with his wife Nicoletta to take matters into their own hands, so they decided to open their home to six young migrants. The family did not just host the refugees, but also provided them with the necessary skills to navigate life in Italian society. Since then, their project has been unfolding and has become a good practice. The “6+6×6” scheme as it was named by the protagonist, foresees integration policies of migrants avoiding big hosting centers. More specifically the Calo’s experience suggest a holistic approach to reception and integration of third country nationals in Europe, over the span of over two years, at the end of which, all 6 newcomers have a job and are integrated in the local community.

The project EMBRACIN- Enhancing Migrants’ Bottom-up, Responsive and Citizen-led Integration in Europe- with a view to understanding, adapting and re-using the Calos’ experience, developed a network of cities interested in exchange, adapt and reuse (transfer) the award winning “6+6×6 Scheme” implemented at local level, scaling up the successful practice and testing its transferability in different EU Countries Cyprus, Greece, Italy, Slovenia, Spain, Sweden ) and to adopt it as “structured model” for migrant inclusion and integration, by verifying its cost – effectiveness and its efficacy in terms of benefits for the migrants themselves and for the hosting communities. 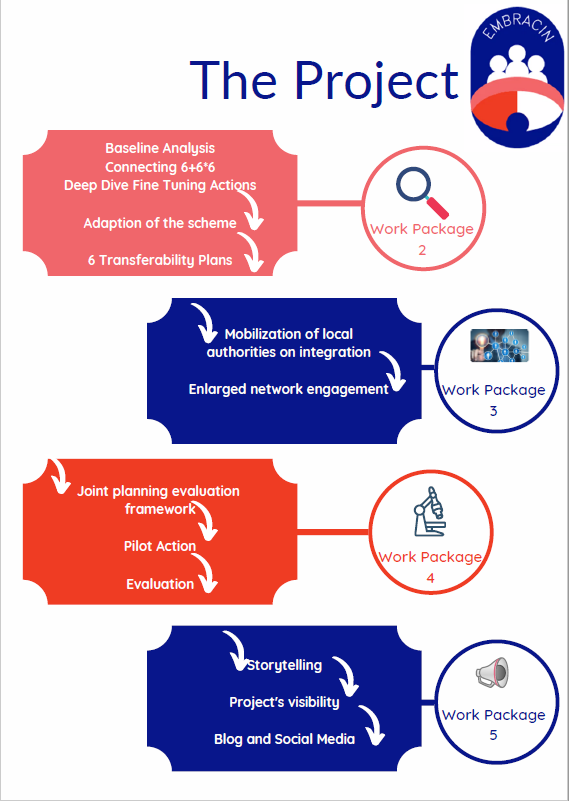 The EMBRACIN project aims to develop and test a model of integration which can be valid for all European Countries, starting from the assumptions of 6+6×6. The partners coming from different countries across Europe (Italy, Slovenia, Germany, Greece, Cyprus, Spain, Sweden), will raise awareness and capacity building on integration policies topics among European local authorities, in particular Municipalities, with the final aim to increase the number of municipalities which will sign the Memorandum of understanding to promote and engage the specific model.

The project is based on five work packages, the success of which and the best interaction between them, will lead to the best implementation of the scheme

Work Package 1: Management and Coordination of the Action

This Work Package is intended for all activities related to the general management and coordination of the action. The Coordination and implementation of activities, the overall financial management, the Monitoring and evaluation of the project’s activities and their results, the organization of project’s meetings are the pillars on which work package 1 is based.

The Work Package 2 aims to analyse, discuss and to adapt the present “6+6×6 Scheme” to the different European frameworks in order to scale-up and streamline the scheme in collaboration with Local Authorities and Third sector actors (NGOs, cooperatives), civil society, families dealing with migrant’s integration. At the same time, it aims to develop and exchange mutual learning opportunities for local and regional-level actors and stakeholders to raise awareness on the Scheme through the network.

This WP sets the foundation for the ultimate goal of the project, which is to create -through increased cooperation – a fertile environment where local- level actors and authorities learn how to understand, adapt, reuse and share successful and effective practice on migrants’ integration. It follows up on the needs and contexts that have led to the creation of this Action, by implementing an in-depth, qualitative, and participatory analysis of integration practice at local and transnational level.

This WP is dedicated to develop the network of local authorities to exchange and create mutual learning opportunities for local and regional-level actors and stakeholders to raise awareness on the Scheme, to enlarge the network, and engage new stakeholders external to the partnership.

The WP is built as a progressive set of activities that aim at mobilizing, raising interest, training and empowering local authorities and stakeholders that are not formally in the project by offering them opportunities to learn from peers, benefit from the knowledge and practice generated by the transfer and testing of the EMBRACIN’ approach.
It can be broken down into three main phases that span over the whole duration of the action:
1) Action-research to map interest and needs of local authorities
2) “Soft” awareness raising during the first year to maintain interest and share preliminary phase results
3) Engagement in learning sessions (online and physical) and in the network (protocols and MoU)

The successful achievement of this work package will increase the participation of cities and local stakeholders in learning /training opportunities and in the exchange of best practice as well as the commitment to further work and promote the EMBRACIN’ approach.

Work package 4: Experimentation and evaluation of the Model

The Work Package 4 covers the implementation and the evaluation of the transferability plan developed in WP2 in the 6 partner cities that intend to adapt and re-use the improved 6+6×6 scheme.

Its objective is therefore to assess the effectiveness and efficiency, as well as concrete impact (outcomes) on the beneficiaries and involved actors, of the transfer of the methodological approach and the operational measures and choice that each city will develop as part of the transfer logic. Thus, this WP ensures that the 6 implementation pilots and their evaluation are done according to high standards established for this purpose and respond to the needs detected at local and EU level.

Consequently, this WP implements the preparatory activities and tools, executive plans, and final evaluation. Moreover, WP activities put the basis for continuing the assessment of project outcomes also after the conclusion of the project. The primary outcome of the experimentation is to positively impact on the multi-dimensional integration situation of participants mainly:

The communication Work Package is functional to achieve the awareness of stakeholders and policy making institutions of the novel approach of the model, the generated knowledge and tested knowhow, with a view to mainstreaming and use its results for further policy improvement or embedment in ongoing institutional and policy frameworks, that is, transfer and capitalization of the results. It is structured to use tactics and channels that are more suitable for territorial outreach and give value to the transnational dimension with high-level events that foresee involvement and tailored material for policy – makers at different level – especially local and regional, but with a dialogue with national and EU level as they have overall mandate on migration issues.

Any cookies that may not be particularly necessary for the website to function and is used specifically to collect user personal data via analytics, ads, other embedded contents are termed as non-necessary cookies. It is mandatory to procure user consent prior to running these cookies on your website.